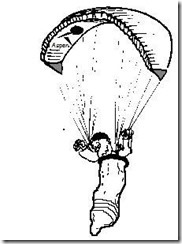 Does the Peter Principle apply to Paragliding? The idea of the Peter Principle comes from a satirical book written by Raymond Hull, based on Laurence Peter’s research. Simply put, it states that in hierarchies, people will be promoted to their level of incompetence, where they languish until they leave or retire. So, you do well at making widgets and get promoted to chief widget maker. If you continue to do this well, you might rise to a position supervising all the widget makers. But your widget-making skills don’t help you in your new HR role, so you are judged to be a rubbish manager, and go no further.

When it comes to buying paragliders, there’s a tendency to promote yourself to the next level of wing. You leave the school with your beginner wing, get on with the local coaches and soon feel ready to step up to a B. Wow! What an improvement in performance – suddenly you’re leaving the hill, but then start fretting about not keeping up with the others. Solution: a C or even a D wing. Maybe that will be fine, and you’ll be ok with this, but what if your skills aren’t ready for this step? Potentially, this could mean a bad accident; or maybe you scare yourself enough to stop flying.

At some point we will all reach a level of incompetence – whether that relates to the wing we fly or the conditions we are willing to tackle – even the sky gods aren’t invulnerable. The hard part is recognising our own limitations and choosing our equipment and risk margin accordingly.

We’ve had some very strong winds lately, and it’s good to see that there are many pilots prepared to walk back down the hill even when there are paragliders in the air. Paragliding is truly a sport where you are responsible for your own decisions, and acquiring the mental attitude that you won’t be sucked into launching by peer pressure is a vital part of your skill-set.

On that note, one of our members was flying in the strong winds on Parlick on Monday 21st. Finding he had very little forward speed he opted to go to the landing field after half an hour. Finding he was still going backwards as he set up over the road at the junction, he had to abandon his plan to land in the corner of the correct field and put down on the other side of the road, in the Wolf Hall field. All was fine, but he knew he shouldn’t be there and quickly bundled everything up and threw it over the gate into the landing field and started packing, just as a quad bike roared up the lane, and its rider spent a few minutes looking around, before giving up and riding off. Maybe coincidence, but it seemed that he was looking for whoever had just landed. So, please take note: set up early, assess the wind speed while well upwind, and don’t push yourself into a tight corner by the road. And if you do overcook it, get out of the wrong field ASAP or prepare for an awkward conversation.